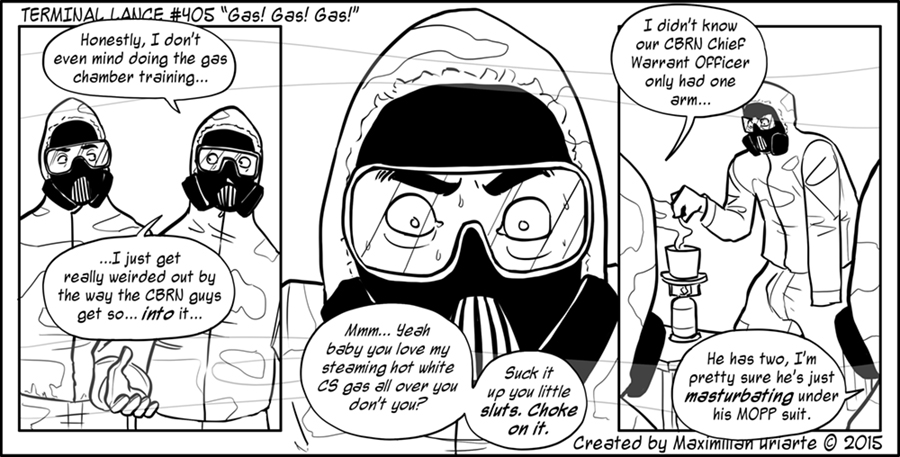 Can you blame him really?

My OIC during my second deployment was a CBRN Chief Warrant Officer, and needless to say, he didn’t do much CBRN stuff on the daily. If you’re reading this and you have no idea what CBRN is, you’re probably a dumb boot anyway, but I’ll explain.

CBRN stands for Chemical, Biological, Radiological and Nuclear. These Marines are your specialists when it comes to chemical weapons, there’s usually a CWO and 2 or 3 enlisted guys per battalion. The gas chamber annual training is like Christmas, the 4th of July, and the biblical apocalypse combined for them, it’s the only time of year they get to come out of hiding and administer their cruel hobby unto the poor Marines. Seriously, they get off on this shit. It’s kind of weird and mildly disconcerting.

The gas chamber gets a lot of hype in boot camp, but you have to do the damn thing every year in the fleet (though I think I only did it twice in 4 years with the deployment cycles). The fleet version is a lot more chill, since everyone is hung over and no one really wants to be there anyway. Usually you just throw on a MOPP suit and shuffle into the dank little room where some asshole CBRN guy is vigorously stroking his ego over some ghetto-rigged Coleman burner, wofting smoke into the air like some kind of fucked up Native American medicine man.

Unlike the Natives though, the tears will be coming from you as you fuck up clearing your mask and choke on your own mucous.

It’s a lot of fun for everyone, really.