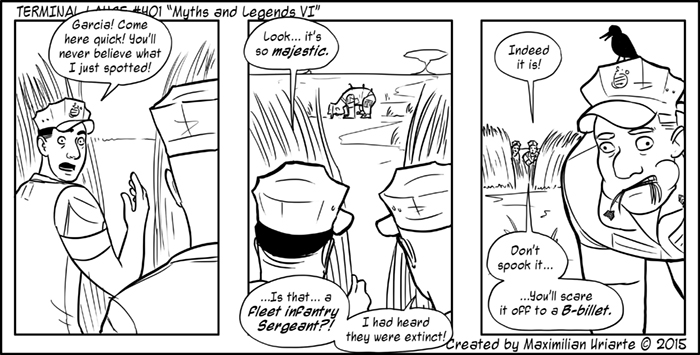 Sergeants in the fleet are a rare and elusive animal. It’s interesting because during your upbringing in the Marine Corps, Sergeants are the one rank you see the most. This is because the B-billets of recruiting, Drill Instructor and School of Infantry instructor are stocked with E-5’s by nature.

Once you get to the fleet, however, you’d be hard pressed to find a single one. My company had more Staff Sergeant’s than actual fleet Sergeants. Of course, this isn’t how it’s supposed to be, but in practice that’s generally how it is. In a perfect world, you’d have 3 Sergeants per platoon in a traditional line company, filling the Squad Leader positions. This never actually happens, and instead you have maybe one or two Corporals, no Sergeants, and a few hard charging Lance Corporal Squad Leaders.

It was so rare to actually have a Sergeant in a line company that often it wasn’t even sure what to do with them. Make them Squad Leaders? Well if Lance Corporals can do that job, it’s kind of beneath them, so they have this awkward platoon guide position as a relay between the Platoon Sergeant and the rest of the Marines.

This is really unfortunate, because as a general thing, all of the Sergeant’s I worked with in the fleet were really awesome guys. They’re still relatively down to earth, but high enough to not take shit from anyone.

If you’re reading this and you’re in the Army, I’m referring specifically to the rank of E-5 Sergeant. For some reason you hooahs call all of your E-5’s and above “Sarn’t,” instead of designating the individual ranks (Staff Sergeant, Gunnery Sergeant, etc).

So here’s to you, Sergeants of the Marine Corps. There’s just not enough of you to go around.

In other news, The White Donkey is still on track for a December 5th release date. I have a deadline and it’s going well, I’m working around the clock day and night to meet it. And before you ask… Yes, there will be motherfucking pancakes.