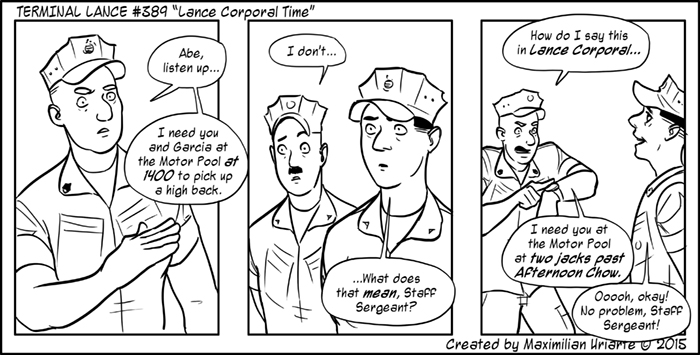 Lance Corporals are amazing animals when they’re on their game, but they have to know what you’re talking about. Sometimes it’s important to break things down for them to understand in a language that makes sense.

Lance Corporals don’t measure time in the same way that most people do. You see, regular people use a series of numbers to illustrate the passage and display of time. However, the world of the Lance Corporal is very different, as measuring time in such a way is irrelevant to their way of life. For them, there are three “tent-pole” moments of the day, and everything else falls in between there somewhere.

Jokes aside, I want to take a moment to offer my condolences to the families and friends of the four Marines that were slain yesterday in Tennessee. These are their names, may they rest in peace.

I considered doing a comic about the event, and even not doing a comic at all today. However, the show must go on, and if I know Marines as well as I think I do, I’m sure they would just want us to try and carry on the best we can.

On a totally unrelated admin note, we’re still trying to track down the trouble ads on the site so we can remove them. Let me know if any of the ads give you issues (like sound, redirects, etc).