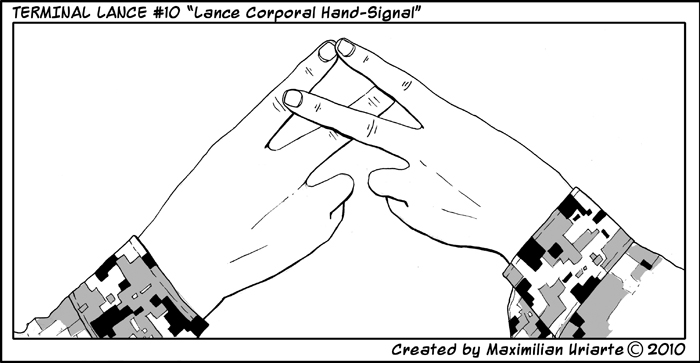 Throw it up gents! Represent your true colors, with the Lance Corporal hand signal. I can’t actually take credit for the hand signal; my aforementioned friend Billdo Faggins, the Wild Cock Goblin created it during our first deployment.

If Sergeants are the back bone of the Marine Corps, then Lance Corporals are the extremities ultimately responsible for performing the tasks to keep it alive. Unfortunately, for the infantry, Lance Corporals have to be more than just extremities. I have seen Lances fill billets they shouldn’t have to, and do it admirably. For instance, the Section Leader billet of an Assaultman section is supposed to be a Staff Sergeant. Obviously, that doesn’t happen in real life. But couldn’t it at least be a Sergeant? Nope, that usually doesn’t happen either. For my first couple years in the Marines, my section leader was a Lance Corporal, until he was rightfully meritoriously promoted to Corporal. After he left, we had another Lance Corporal take his place until he was again promoted to Corporal.

So if Lances can fill the shoes of Staff NCO’s and NCO’s, why not be proud to be one? I say we take the shame away from being a one-chevron, cross-rifle rocking monkey and take pride in it! Throw up that hand signal and let the world know that with a promotion system as fucked as ours, what’s the point in giving a shit? Ever seen a Corporal or Sergeant with less ribbons than you? I have, and it pisses me off every time.

I’m not a Lance because I got in trouble, or I didn’t do my job. I don’t claim to be God’s gift to the Marine Corps, but I performed my job just fine. I’m the result of a promotion system that is flat-out broken. The month of February’s score requirement for 0351 is 1772. Good fucking luck. Meanwhile, don’t mind the boot NCO with 2 ribbons trying to tell you what to do because his requirement was in the 1500’s (0352 anyone?).