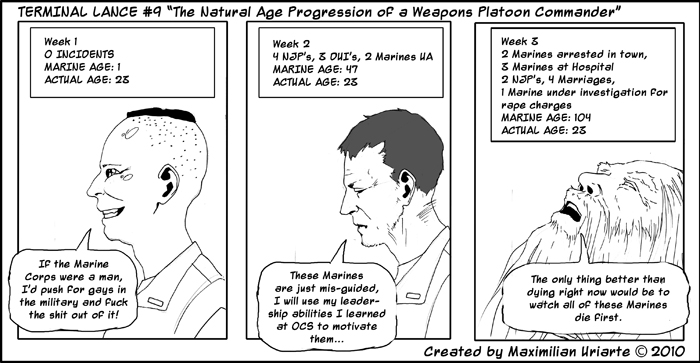 A new platoon commander is a beautiful thing. Shiny, bright eyes anxious to unlock all the potential of the Marines under their new command. Fortunately, it doesn’t take long to shatter their insidious fantasies at the reality of it all. In my experience (this may not be representative of the Corps as a whole), Weapons platoon tends to be a little bit more rowdy than their 0311 counterparts.

It was always somewhat confusing to me, the idea of putting someone with absolutely no combat experience in charge of a platoon of 40 Marines–many of which have been on one or two deployments. Slap a shiny bar on that collar and you have yourself a natural-born leader! If only that were the case. The idea that someone has a bachelor’s degree makes them fit to lead Marines in combat is often-times downright absurd. In all reality, leadership cannot be taught through OCS, bootcamp or any other military school in the branches. Leadership is a virtue that you either possess or you do not. I’ve seen platoon commanders shatter and I’ve seen them succeed. Typically, the sooner they realize that the Marines under them aren’t interested in their boot-like motivation will succeed faster than others.

Once an infantry Marine has been deployed to a combat zone, motivation either completely dies or becomes so far buried underneath layers of disgust and anger that it’s really not going to come out with some school-taught, bullshit acronym about what it means to be a Marine. The saltier of the bunch will scoff at the very thought of following someone who has seen less than them, and can you really blame them?

If for some reason you’re a Lieutenant reading this, don’t feel too disheartened. It’s not impossible to be a good leader with no experience, it’s just unlikely. Keep yourself in perspective and you’ll do fine. Marines will respect you more for being honest than for being a faux-war hero trying to pass off field training in Quantico as experience.

So there’s my rant on Lieutenants. I dunno if that was too much, but I really just type whats on my mind. My site is open to anyone, you don’t have to be a Lance to read Terminal Lance. The bullshit is the same regardless of your rank, I’m pretty sure. I do believe, though, as Lance Corporals we often get the brunt of it the hardest.

I tried to do something different with the speech bubbles. Instead of using tools in Photoshop to render them as perfectly formed circles, I drew them by hand. I like it, inspired by what I was seeing at Penny Arcade, I think it allows for a more expressive image. I don’t really know what anyone else thinks of the comics art or styles because no one tells me. The forum is open, gents. We have something like 30 registered users but no one posts anything! If you hate the comic, please let me know on the forum and we can hash it out. As far as artwork goes, I try to keep the comic looking as professional and well-done as possible. I like to think it is the most well-drawn military strip available to you warfighters.

Some times I do skimp on the art a little, when I’m in a hurry to get a strip done I may half-ass it a bit. I try not to, but sometimes I just gotta get it done to get to you, my loyal readers. I suppose I could just adjust the deadlines, considering I made them up and no one enforces this comic whatsoever, but I made the commitment of Tuesday and Friday and I plan on sticking to it.

On this subject, if anyone from Leatherneck or the Military Times, or anything else, is reading this trash, let me know if you want to publish it. We can work it out, I can edit the words for content obviously, as I fully understand the idea of profanity on a public print form is usually unacceptable.

With that said, I promise you all, the site will always remain uncensored. There’s just no reason to censor something like this. I pay for the web hosting, no one tells me how to do this. I just do it. Like Nike, bitches.

Terminal Lance #8 “The Many Uses of a Glow Belt”