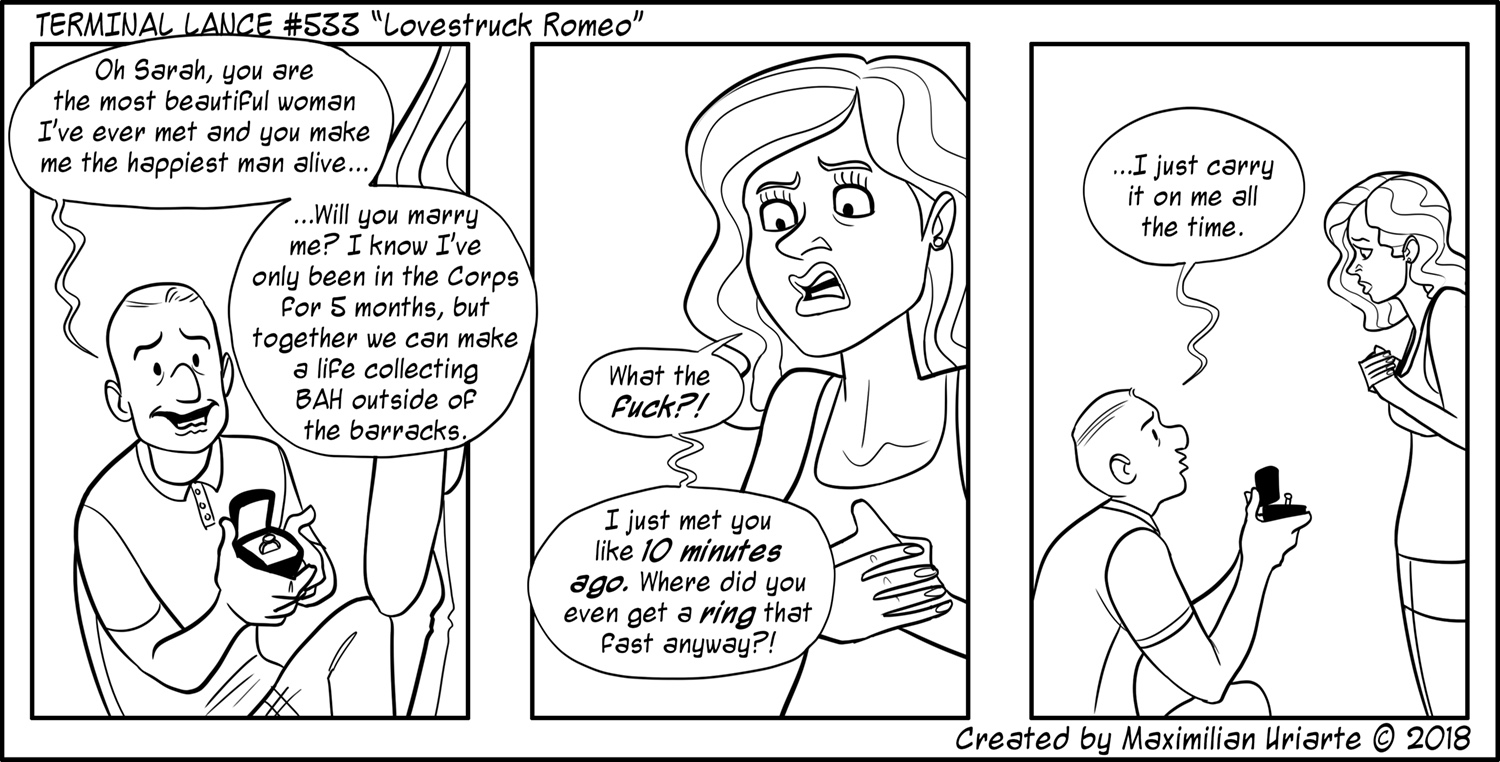 Some women go their whole lives wondering if that special someone will get down on one knee with a diamond ring and ask her that magical question. Women in Oceanside and Jacksonville know that they can accomplish this just by standing around at the right barbershop on a Saturday. Ladies, date a military man for more than a few minutes and you may find yourself the owner of a new, cheap engagement ring and a mountain of emotional burden.

I’ve talked about this a lot in the past, but there’s some pretty clear cut issues that encourage Marines (and other service members) to marry young. The system itself is rigged, as it’s probably the only profession in the world that will double or triple your take home pay simply for tying the knot.

This seems like an innocuous problem enough, except that young people making lifelong commitments with serious consequences probably shouldn’t be encouraged.

However, if they cared about that, they’d probably stop recruiting 18 year olds into the United States military all together.

In other news, I’ll be speaking at Rutgers University in New Jersey on Thursday night at 7pm at the Zimmerli museum. It’s open to the public so come on by and say what’s up and listen to me talk about storytelling. As well, you may get a sneak peak at my latest project… The White Donkey is currently an exhibit at the museum as well, so if you’re a fan of the book you will be able to catch a glimpse of some never released development materials on display.

Also, check out this fun article from Task & Purpose.

If I can elaborate a bit in my own words, I completely understand that the Marine Corps’ own PAO guys are, like, their own thing and wanted to post a fun video because they’re fans and they’re having fun with it. I can appreciate that as it is, but it’s the principle of the matter that makes me uneasy. On one hand, the Marine Corps brass at large will not hesitate to ruin the life of a 19 year old over a funny video I post that they don’t agree with, but on the other, they will think a video is cute and share it with the world on social media. This was never really supposed to be news, but Paul (a friend) asked me how I felt about it and I elaborated on it honestly.

It just kind of made me feel gross, is all.

I haven’t been updating as much lately with how inundated with work I’ve been on a new book, but I also just wanted to give a shout out to the National Museum of the Marine Corps. I have been officially inducted into their ranks as an official Combat Artist. No, this does not mean I’m going back on any kind of official duty status, active or reserve, it just means I can work with them as an independent civilian to produce real combat art perhaps in the future.