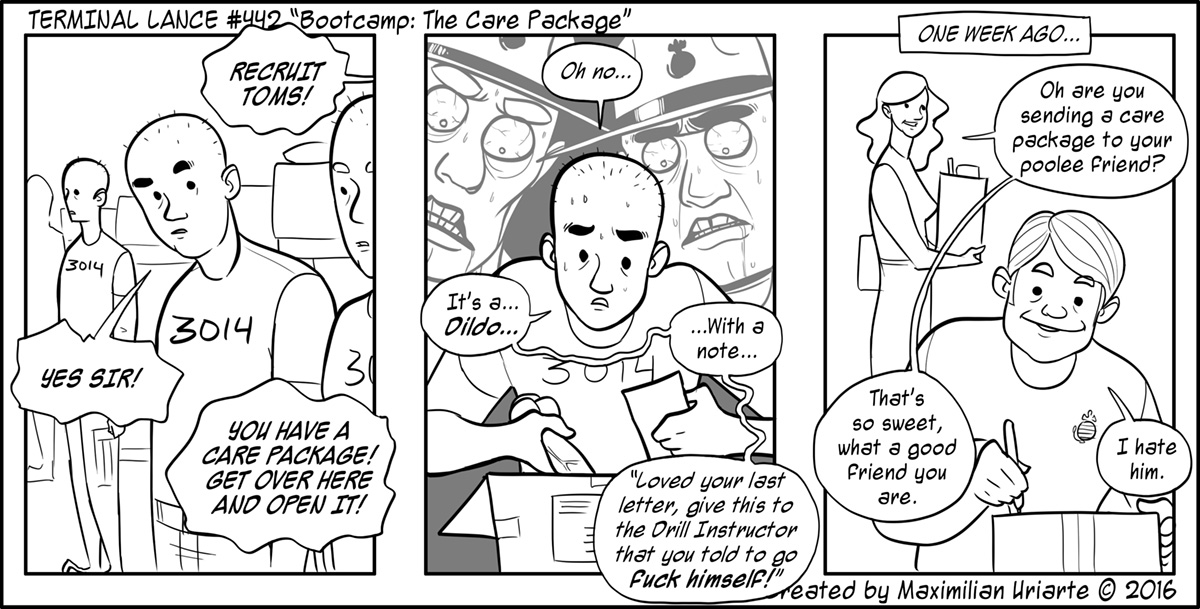 Bootcamp is a shitty 3 months.

As if you don’t have enough to worry about with sweaty, angry men yelling at you 24 hours a day, you never know what might be lurking in a box some good-intentioned family member or friend sent your way.

Comedian Sarah Silverman panicked yesterday after realizing she may have made a grave mistake for her recruit nephew.

@USMC please help! I sent a care package to my nephew at Parris Island & now am worried he'll be in trouble for it. I'm an idiot. Please dm

Even without such flagrant abuse, boot camp is arduous and mostly awful. I’ve said it before, but I would much rather go back to Iraq than do another 3 months at MCRD being treated like a recruit. I feel the worst for those poor kids that spend months in medical recovery, being treated like recruits for much longer than originally intended.

On a side note, Recruit Toms might become my goto recurring character for all matters pertaining to boot camp. After I finished drawing this strip, I realized the poolee in the third panel looked a lot like my rendition of Jodie. I wonder if perhaps this is his origin story–a failed recruit–a fallen angel of sorts.

Only time will tell, but in the meantime, don’t be a dick with your care packages

On a sidenote, I’m still looking for content and creators! Email me at maximilian.uriarte@terminallance.com with something funny. Preference goes to Active Duty, but I’m open to anyone that is good.

I’m super happy to have the new site up and running! We’re still working out some kinks with the functionality on this end, but should be straightened out soon enough. Check out the new Opinions section by using the menu at the top of the page.