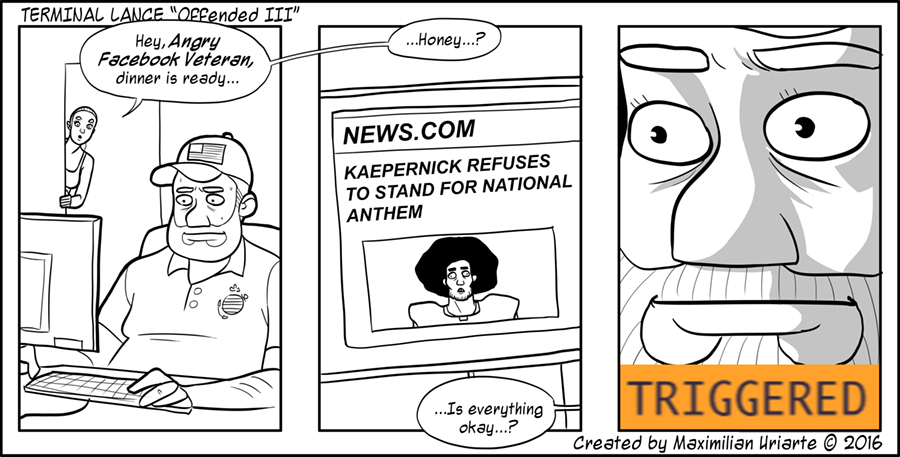 A big deal on the national stage this week has been 49ers quarterback Colin Kaepernick. The Veteran Outrage Machine™ has been in full gear after Kaepernick refused to stand for the National Anthem as his own dumb way of protesting some unrelated issues.

Of course, this story technically has nothing to do with veterans or the military.

This is a story about the flag, America, patriotism, traditions, racial inequalities in America, football, etc. A better story on this would probably be about the shallow commercialization of American traditions by massive multibillion dollar conglomerates such as the NFL and the force-fed social obligations of fans and players in the name of “patriotism.”

In actuality, not a single one of these is exclusive to the military community, active or otherwise. And yet, the veteran community has taken ownership of this “controversy” due to the usual undying obligation to turn irrelevant issues into something about them. Everywhere I look, I’m seeing yet another veteran offer their “unique” opinion on why Kaepernick should or shouldn’t stand for the National Anthem.

I would argue that very few veterans check enough boxes to even come close to offering anything remotely insightful on the subject, and to that extent I would give credit to Nate Boyer for his levelheaded and understanding take as both an NFL player and multi decorated combat veteran.

However, for every one Nate Boyer, there’s ten Angry Facebook Veterans offering shallow perspective and grossly misusing the term “fought” as it relates to Kaepernick’s constitutional rights.

(Pro-Tip: if you were a POG [or grunt] that never even deployed, you probably didn’t “fight” for anyone’s rights)

My opinion on Kaepernick?

Who the fuck cares what I have to say about it?

In other news, there’s some fresh new skivvies up on the official Terminal Lance store! Show some love for the firing line.