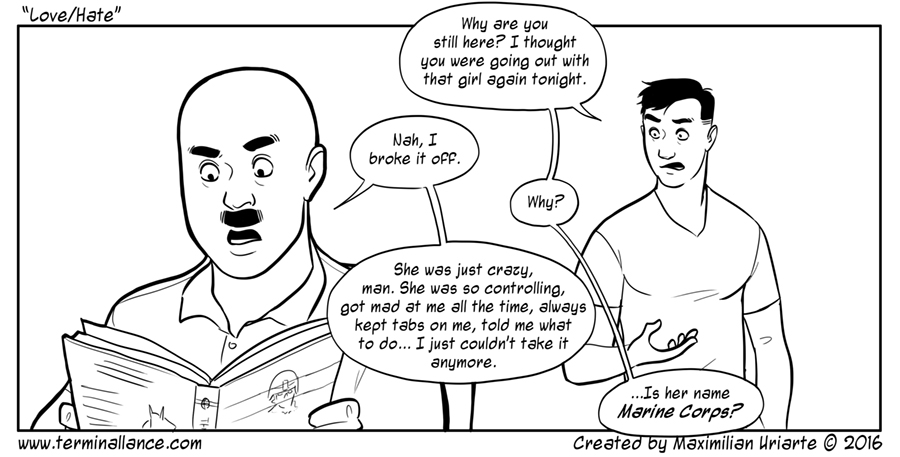 This is an abusive relationship.

All Marines have a relationship with the Marine Corps, and for the most part it falls somewhere on the Love/Hate spectrum of things. The Corps is what it is. It can be really awesome sometimes and other times it can be really awful. It’s a lot like a broken marriage or a controlling significant other–a relationship wrought with suspicion, anger and contempt–but with occasionally really great sex.

You more keen observers of Terminal Lance might notice that this is a Marine Corps Times comic strip published a few issues ago. Not to be too apologetic, but my new place still isn’t really up and running. Lack of internet has severely impeded my ability get back to full speed (connecting via my phone right now). I’ll be back up and running hopefully by Friday! Internet gets installed tomorrow, so I have that going for me, which is nice.

On a totally unrelated note, Burbank is the fucking shit. Like moving usually is, it’s been exhausting getting settled (and moving/buying furniture), but we’re nearly there.

I say this a lot but there really is a lot of great behind-the-scenes stuff going on right now that I think fans of TL will be really excited to see come to fruition soon. Among them are a new website, new comics, and some really big things I can’t talk about right now. There’s a lot of new things happening, but they take time to develop and I don’t like to show my hand until the time is right.

Stay tuned, it’ll be worth it.

On a side note, if you haven’t bought a copy of The White Donkey, you should do it. I heard it’s good.

Terminal Lance “Her Name is Rio”