I seem to be focusing a lot on the subject of penises in bathroom stalls lately… perhaps I also suffer from this phallic-obsession like so many Marines before me. Regardless, I find the idea a source of endless amusement for me. Marines every day send me emails with photo attachments of the various penile-art pieces that coat the walls, ceilings and floors of their sheltered places–and I laugh at every one of them.

On the subject of shitter graffiti though–many Marines have asked me what the story behind Wagner is. Everyone wants to know who this mythical creature of port-a-john fame is and why his name is crudely drawn in every stall from al Anbar to Helmand. Well, my friends, I think I have enough information to finally set the story straight.

I received a plethoric amount of emails concerning the matter, almost every one of them had a different story. However, one email in particular stood out to me… an email from Wagner himself:

Story behind Wagner loves the cock.  Alright first off I want to start off by saying that is complete bullshit and I am going to kill my at the time Cpl who started it I was a lance.  2005 Hit Iraq our unit took over FOB Hit and the AO associated with it from an Army Unit, there was an Army LT whos name was Wagnor and they all hated her.  Ok that’s how it started now my Cpl saw it in a port of shitter and thought it would be funny to change it to my spelling.  It caught on to my whole unit and it spread across the world.  This is coming from the Actual Wagner all others can fuck off with their bull shit stories.

Why do I believe this email over the others? Because I received more than one email to back this story up. I got emails ranging from a Sergeant Major named Wagner that no one liked to a kid that went UA. Some stories I got said it started in 2008, which can’t be true, because I personally remember reading “WAGNER LOVES COCK” before then during my own enlistment (I joined in 2006). This email sent to me by someone that knows Wagner also backs up his claim to fame:

Wagner loves the cock started in Dec 2005 at FOB Hit in Iraq.  We were with the 22nd MEU at Al Asad and were waiting to head out to HIT and had an 0231 named Wagner with us who made the comment one day that he hated the COC.  Our systems guy wrote “Wagner loves the COC” on a dusty window in the building we were using until we left.  We got to hit and someone with the army unit we relieved had written “I want some dick”, so I wrote Wagner next to it as a joke.  The next day we saw the first “Wagner loves the cock”, and thought it was funny so we wrote it a few more places.  I suspect our systems guy Adam wrote the first one, but never found out for sure before we parted ways.  Our whole unit started writing it in every porta john they used, especially the grunts who were debriefed by wagner, as they thought it was hilarious.

Although the two versions of the story are slightly different, the time period and the units match up. These weren’t the only two emails I received concerning the matter that coincided with this tale, but these two were the most complete in telling the story. It is possible that other Wagner instances appeared in different parts of the world at the same time, but I do believe this to be the Wagner in question. Wagner was a Marine with the 22nd MEU in 2005, in Hit, Iraq.

To Wagner, I salute you, and all you’ve done for bored Marines dropping deuces with writing-utensils everywhere. 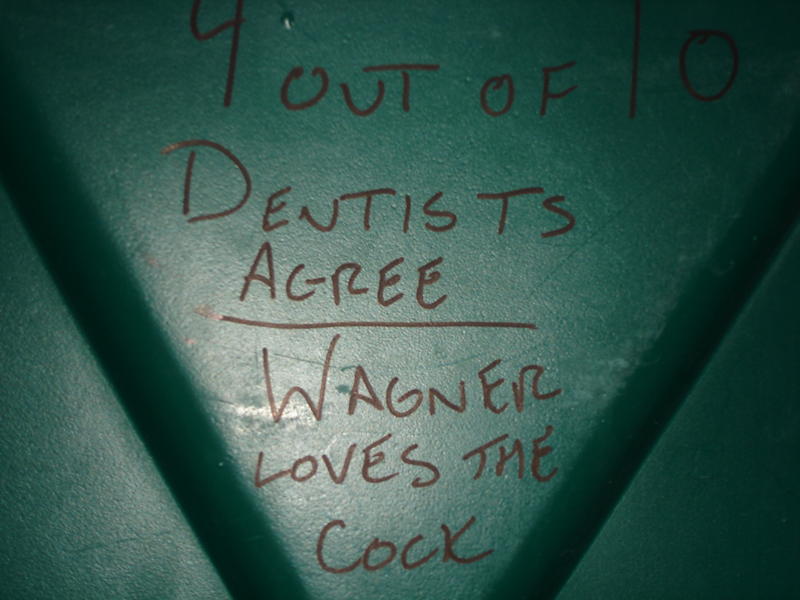 Terminal Lance #124 “The First Night Back”