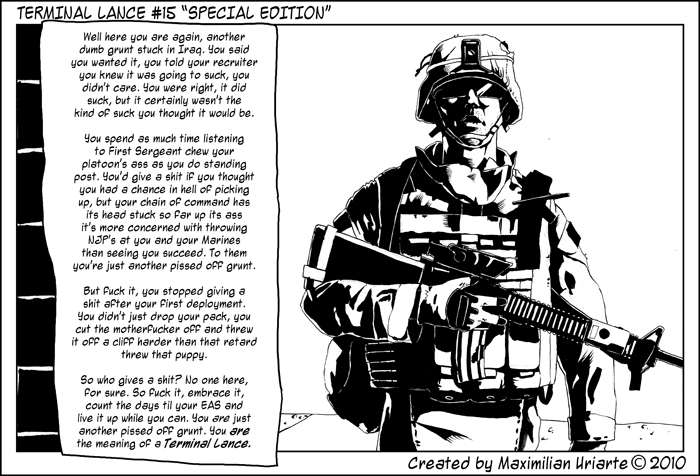 The following is an update I made in the news post regarding this strip:

I’d like to take a moment to address the statements I made in Terminal Lance #15 “Special Edition.”

I am doing this because I don’t really want to run into any problems with it, but I’d like to say that it is really in no way directly insulting anyone–nor should it be taken that way. What #15 is, is an examination of the state of mind and being for the average Lance Corporal infantryman in a combat zone. I am trying to be authentic and capture what it is to be that guy, the grunt. If someone takes this as a direct insult or feels that I am being too harsh or in any way unrealistic and improperly representing the Marine Corps–then please, go to the front lines without your rank on and ask the average Lance Corporal what he thinks.

I’ve said it before and I’ll say it again: I absolutely do not hate the Marine Corps, or any of the time I’ve spent in it. I think it is a great experience to go through, and I will always remember and cherish everything I’ve done. I genuinely feel like the Marine Corps has made me a better person in the long run, and I would recommend to anyone to give it a shot. While I would never spend my whole life here, to each his own and I respect everyone for their own decisions.

I genuinely feel like there are a lot of things with this organization that could be greatly improved for the benefit of everyone. This strip is precisely what 90% of the Marine Corps infantry on deployment is thinking in their heads. This comic has a target audience, and it may not be everyone in the Corps.

I have yet to receive any negative feedback throughout the ranks regarding the strip or any of the content therein, but people are telling me to be careful. I will say this though, have a sense of humor and a grain of salt when you read this and you probably won’t have a problem with anything I come up with. The salt is key though…

I really wanted to do something special for my 15th strip. Not only is this strip #15, but this strip is the official marker of over 50,000 page hits! In less than 2 months we’ve managed to make Terminal Lance an underground hit in the Marine Corps. So keep it up Marines, Lance Corporals of Men. Keep sending those chain emails, keep the Lance Corporal Underground going strong.

With this strip I wanted to really exemplify what it is to be a Terminal Lance. This strip is in celebration of you all, and all that you are in the Marine Corps. It really rates to be longer, but I didn’t want to overdue it (which I may have done here). If you disagree with the idea of glorifying the Terminal Lance in all of whatever glory he rates… my short response is “what-the-fuck-ever,” but my more tactful response is, “fix the cutting score system.”

I’ve said it before and I’ll say it again, the system is completely broken, and no one knows it better than the grunts. The Terminal Lance is not just an ideology–it is an actual, unfortunate phenomenon. There was a period of time in my platoon where we literally had no NCO’s. Was this honestly our fault? Marines from IPAC are getting promoted by the flock and you tell us, “Well you should try harder to get meritoriously promoted.” But why? Why is the system so broken that we have to meritoriously rate something that the rest of the Marine Corps has no problem achieving?

Maybe it’s just my MOS, the 0351. After all, over the last year our cutting score has been in the upper 1700’s while the rest of the grunts have had it in the mid 1600’s. But again, when it’s all said and done, the majority of the weapons platoons in the infantry end up doing the same jobs as everyone else–so why even have the different scores? I recall being a machine gunner on my first deployment, not shooting rockets at T72’s or laying breaching charges on doors. Perhaps some day the system will change or be fixed, but I guarantee it’ll be long after I’ve transferred my happy ass to the first civ div.

In any case, I made this strip to show you all that I truly appreciate you all and your eclectic, pissed off sense of humor. Keep passing it along, and I’ll keep making the comics for you all. If you can’t tell, I stepped up the artwork a notch in this strip to show you that my art-cock is indeed bigger than what the strips may imply. I’ll be honest, sometimes I slack on the art to get the strip done. Ultimately though, as long as the artwork is better than Sempertoons, I think I’ll be happy with it.

If you’re curious to know how I did it, well let me show you. I started with a pencil sketch. I do all of my line work by hand using pencil and paper–old fashioned, I know. Just another pissed off grunt.

The pencils (in this case) are 10″x15″, which is a standard size format for comic books and the like. Once I have the pencils completely laid in, I start with the inks. Again, I do all of my inks by hand.

Inking is a slow, arduous process. If you don’t carefully plan out your pencils, there’s good odds you will fuck up the inks. Believe it or not, inking is not “tracing,” as some Kevin Smith movies would promote. Inking is actually a very difficult art that I don’t consider myself to be the best at.

In any case, once I finish the inks using Micron pens, Prismacolor markers, and Speedball India Ink w/brushes; I scan it in and add the text bubbles and text via Photoshop after I clean it up a bit.

The More you Know!

Anyway, thank you for reading my long rants and strips. Lets keep it up, Marines!

PS: I will create and upload some new wallpapers soon, so stand by!