As I said in the very first comic I ever did, 10 years ago now, no one gets to pick their own nicknames. You watch movies like Top Gun or whatever and you think you’re going to end up with some badass name like ICEMAN, or GRIM REAPER… Instead you end up with FUCKHEAD, because the ONE TIME you forgot your NVG’s and the whole platoon had to spend a night looking for them in the field. They never forget.

Shit is going crazy as I type.

There’s a lot going on right now in the military sphere, thanks to all of the insanity in the Middle East at the moment. All I can hope for is that the Marines and other service members stationed abroad are staying safe and looking out for each other.

In other news… Sunday was the 10th Anniversary of Terminal Lance. As I mentioned over the various social media channels, I could have never predicted as a Lance Corporal in Hawaii that TL would become the phenomenon that it has. I legitimately thank all of the Lance Corporals across the Corps for the love and support over the years, and look forward to more to come.

Today, January 5th, marks the 10th birthday of Terminal Lance. In 2010, when I began this comic endeavor from Marine Corps Base Hawaii, I could have never known the impact it would have on the Marine Corps in the years to come, and the impact it would have on me as a person. This strip and the online community it has fostered over the years has taken me to places I would have never dreamed of, and I owe it all to the Marines that have read it for the last decade. Terminal Lance is and has always been about the Marines that read it. From day one, the goal of Terminal Lance has always been to give the lower enlisted Lance Corporals of the Marine Corps a voice. Much to the dismay of some higher-ups, I'm sure, I think we have succeeded. Funny comics, videos, pictures and stories from Lance Corporals across the Corps might seem arbitrary at this point, but believe it or not, there was no Terminal Lance before Terminal Lance. There wasn't a place for Marines to laugh with each other from all over the world, from every base and every place. Terminal Lance changed things, and there's no going back. Thank you all for giving me an opportunity to make you laugh… And stay tuned, there's more Terminal Lance to come. #terminallance #usmc #marines #marinecorps #military

As for the Duty Doodle contest, look forward to the winners on Friday… Stay tuned. 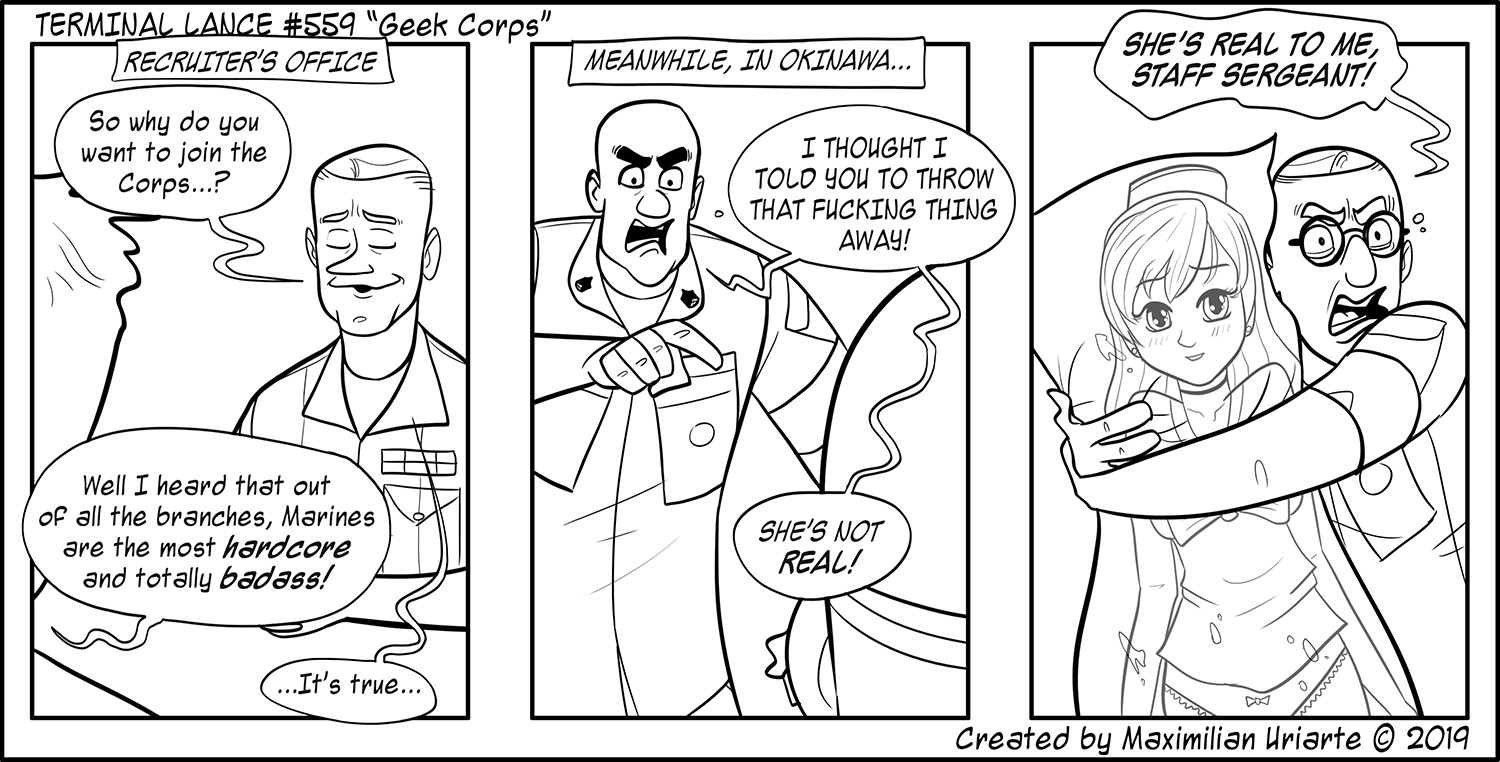 Romance in the Marine Corps usually works something like this for male Marines:

Boy has girl “back home,” probably a high school sweetheart or some such. He joins the Marine Corps, graduates boot camp, comes home on boot leave and asks her to marry him Girl says yes, she moves away from home,

Anecdotally, from my own observations, this doesn’t seem to be the case with female Marines. Lady Marines seem to exclusively date other Marines (or otherwise service members from other branches). I can make some rough guesses as to why, such as the fact that women make up a total of less than 8% of the entire Marine Corps, leaving the 92% of hyper masculine and undersexed men to fight over them. Or perhaps women generally feel like civilian men are less masculinely appealing than their Corps counterparts.

The world may never know, but if you can find me a female Marine married to that civilian boy from back home, I’d love to talk to him.