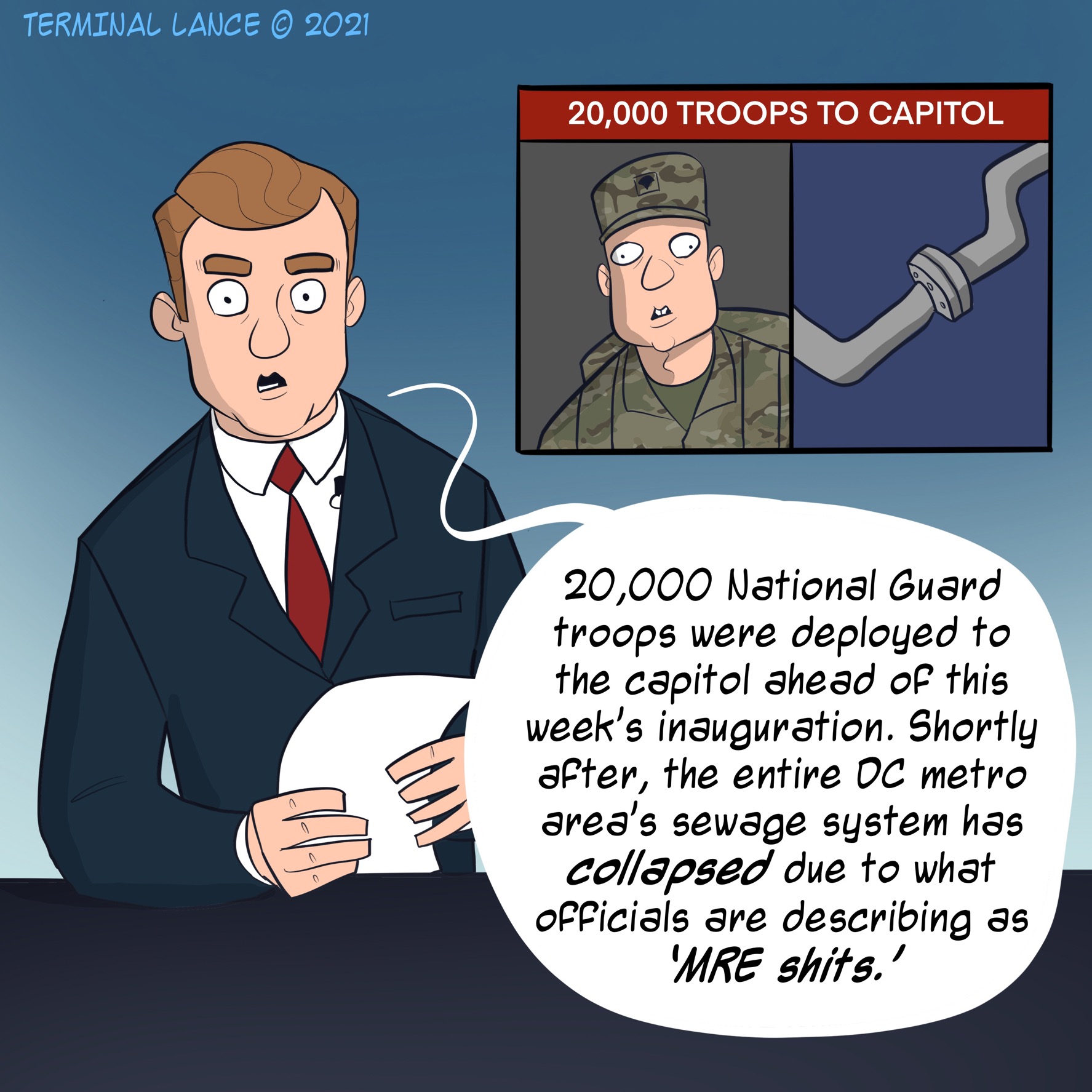 Unless you’ve been living under a rock or something, you probably saw that around 20,000 National Guard troops were deployed to DC in anticipation of next week’s Biden inauguration.

Honestly this is great. DC’s metropolitan area has surely been hit with the same economic downturn as most cities in America, so getting some troops in there to stimulate the strip clubs and Subways is really going to help turn things around. We can only hope that the capitol’s infrastructure can handle the influx of rock-solid MRE excrement and increased other bodily fluids entering its sewage system.

All of this is pretty crazy, but what I don’t understand is where the hell are their iso mats? Cold floors are no joke. I’m sure most of you by now have seen the issue regarding the California National Guard and their fraudulent bonuses being paid out, and consequently forced to pay back.

The TL;DR of it is that the California National Guard handed out reenlistment bonuses during OIF/OEF without properly qualifying the bonuses, resulting in $70 million of bonuses being passed out illegally. While there were a select few members actually guilty of fraud in this situation, the vast majority of these guys had no idea they weren’t supposed to get the bonuses.

Probably the most disturbing aspect of this situation isn’t even that this happened at all. Waste, abuse and mismanagment happen all the time in the military due to incompetence, but that the solution was to simply demand the money back 10 years later. I can’t imagine the mindset, likely alcohol induced, that would consider this at or even near the top of all options. Like how big of a piece of shit do you need to be to just jump straight to this without even thinking to yourself “maybe we should take this issue up the chain of command and find a solution that makes sense” before demanding and roughly fucking over thousands of veterans that did nothing wrong.

Of course anyone that’s had a run-in with their paycheck knows this is par for the course. The Marine Corps mistakenly over-pays people all the time, then demands the money back once they find the error by reducing your next paychecks accordingly. In 2016 I’m not even sure how this happens, but it happens all the time.

At this point, even the President is paying attention, and the issue is likely to get fixed. However, who is to say that anything would have changed had the story not broken in the LA Times last week. It is painfully obvious that the only reason anyone cares now is because they were caught.

Anyway, I don’t normally cover National Guard or Army issues, but this flagrant green weenie hate-fucking was too obtuse even for me.

On a side note, I’m sure you noticed that over the week we’ve been featuring some new writers. If you missed it, head over to the Opinion section and check it out! We got some great stuff going, with more to come! I’m actually still overseas, and officially engaged as of last week, which is why I haven’t been posting in a very timely manner.

I hope she knows I don’t get BAH anymore.